I’m cheating slightly, and capturing my May returns on the 29 May, during the UK’s holiday weekend.  This leaves out the last trading day of May, Tuesday 31/5.  In effect this means that 31/5 will become part of my June 16 returns, so it will catch up with me.

May has been pretty uneventful from an investment perspective.  The FTSE-100 index stayed at around 6300, and S&P remained close to 2100.

What else happened in May?

Against this backdrop, my portfolio returned a positive 2.0%.  Against a market weighted-average 0.8%. Aside from Australia (up 3.6%, but <5% of my weighting), the only notable thing was that bonds were up yet again – by 2.0% in the UK.  The pound was steady against the dollar, but up 2% against the Euro – which will have helped my returns beat the constant-currency market average. 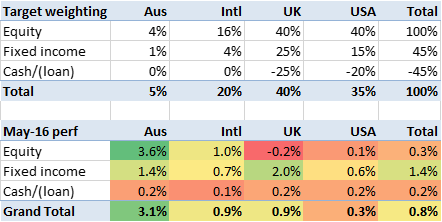 Why am I up by more than 1% more than the market?  Partly I think because I remain underweight commodities, which had a bad month.  Partly due to my leverage – with debt funding a third of my exposure, any underlying gain should be amplified by around half.  And partly just noise.