War: time to buy or sell?

My generation’s Cuban missile crisis is on the front pages. All manner of existential questions come to mind.  But as a starter, what’s a simple passive-orientated investor supposed to make of armageddon?

Past performance is no guide to future results.  But history rhymes.  What has happened in prior conflicts?

I’ve taken a cursory look at the UK and US equities markets.  Even for these markets, the most mature in the world, data prior to 1950 is pretty thin.  But I’ve found one study on each side of the pond and overlaid them on top of each other – hey, I said ‘cursory’! The background thin graph is Dow Jones; the foreground thick blue line is UK Equities (from a recent Barclays Equities Gilt Study). Both are nominal price indices – i.e. before inflation and without reinvestment. 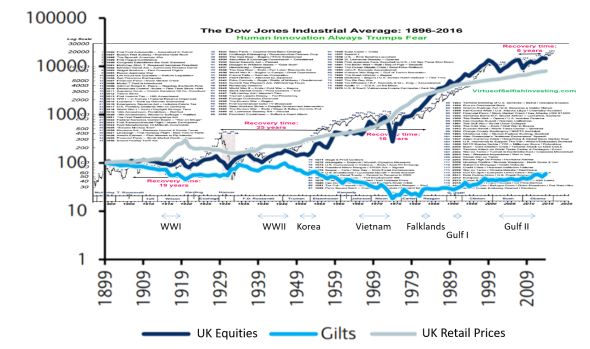 Here’s what I observe:

The US and UK equity markets track each other very closely.  Notwithstanding the booming-and-busting 1920s, both markets look pretty similar for the first half of the 1900s.  Yes, the US streaked ahead for twenty years post 1950.  But the UK overtook around the 1970s oil crisis and maintained its lead for the rest of the twentieth century.  What is a decade or two of underperformance between two cultures separated by a common language? Since 2000 the two have been visually indistinguishable on my crude graph.

How about the wars, then?  Given that both the US and the UK have had several epoch-defining wars in the last 100 years, you’d imagine you’d see the impact in the stock markets.  But in fact the wars are far less obvious than the financial crises.  The 1929 Wall St crash stands out on this graph, and US equity markets didn’t recover for 25 years.  The oil crisis did more damage to the UK than the US, though recovery was quicker (<10 years) than the USA (16 years).  Even the global financial crisis in 2008, in which equities fell almost 50%, isn’t too obvious thanks to the rapid asset price recovery that followed; the dot com bust of 2000 hit slightly harder.

If I squint I can see an argument that sometimes the market slowly declined into the outbreak of war.  Certainly this looked to have happened in both the UK and the US for WWII, and the UK for WWI. But the Korean war and the short Falklands conflict saw nothing of the sort; the equities markets were booming throughout.

Of course, these stock market histories were written by the victors.  What about the losers?  The German equity market certainly fared far worse, with (the defeat at the end of) WWI and WWII being crippling for its equity markets.

So, there we have it.  One clear lesson: our equities will be fine, so long as we win.  In the meantime, diversify on the beaches, diversify in the hills and diversify in the fields and in the streets. We equity investors must never, ever surrender.