Today’s budget, Osborne’s first ‘pure’ budget, is a fascinating bundle of policy, politics and posturing.  For us FIRE eaters, there is plenty to think about.  But for me there is one unambiguous negative: the tax hike on dividends for those of us with sizeable investments.

Dividend taxes are notoriously difficult to understand.  I find the easiest way to understand it has been to consider the Government as wanting to tax (and I mean tax – they ignore National Insurance here) people the same whether they earn money as salary or whether they incorporate as a company and then pay themselves retained profits as dividends.   The system we’ve had for years has seen the Government do this as follows – taking £1000 of salary/profit as the starting point:

In his July 2015 budget, George Osborne has done away with this system of tax credits.  In fact he has done four things: 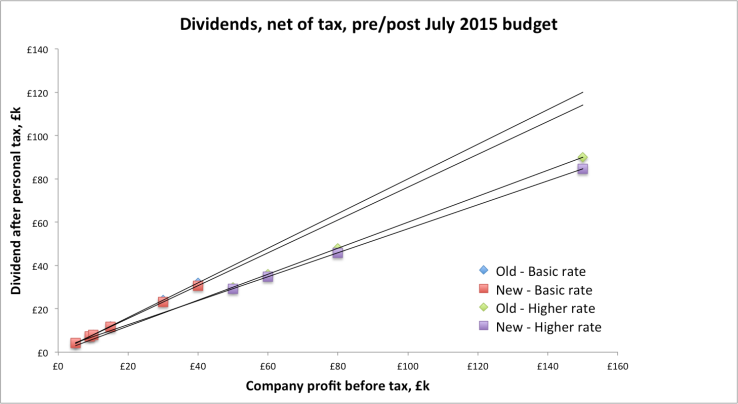 My graph above shows the dividends retained at various dividend income levels under both the Old (pre Osborne tax wedge) approach and the New (post Osborne tax wedge) approach, for both Basic rate and Higher rate taxpayers.  Additional rate taxpayers, don’t bother asking – it hurts. What these graphs show is that if you have less than £9.1k of dividend income (and assuming that is your ONLY taxable income), you’re winning.  If you have more, you’re losing.  At £50k of taxable income, you’re losing by about £700 – less than 1.5%.  But at £100k divi income you’re now keeping only £56.98k, whereas before you were keeping £60k. This is a tax rise of 3.02% in the pound.  Because we are all in it together.

I have to admire Osborne’s cunning here.  This is too complex to follow for 98% of people, and for the 2% who care it sounds better than the old system even when you pay attention. But in fact it is due to raise £7bn of tax, and amounts to a significant tax increase on investors.

What implications does this have for FIRE seekers?